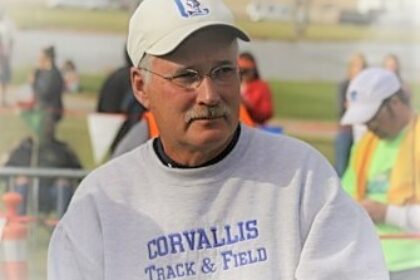 Montana Coaches Association is pleased to announce that long-time Corvallis coach, Mark Yoakam will be inducted into the National High School Athletic Coaches Association (NHSACA) HALL OF FAME at their annual convention’s Hall of Fame Ceremony, to be held on July 22, 2020 in Lincoln, NE  Friends, and family are invited to attend: https://www.hscoaches.org/summer-convention

The Montana Coaches Association is pleased to announce that Mark Yoakam, of Corvallis, has been chosen as the 2020 Montana inductee into the National High School Athletic Coaches Association (NHSACA) Hall of Fame.  During his impressive 45-year career, Mark has been an integral part of an amazing 60 state trophies, as either head or assistant coach, including 28 State Championships.

Yoakam invested 26 years at Glasgow, where the Girls’ Cross-Country teams set a national record, winning 8 straight titles with Mark heading the program for the final 5.  During his tenure, the Scotties collected 8 State Championships, 6 in Girls CC and one each in Boys T&F and Girls T&F.  Yoakam then moved to Sidney, Nebraska, for 6 years before returning to the Big Sky Country and Corvallis, MT, where he has become one of the state’s most respected assistant coaches. Mark has helped guide the Blue Devils to an amazing 36 state trophies, 20 of those being State Titles (6 Girls’ T&F, 5 Boys T&F, 5 Girls’ CC and 4 Boys’ CC) along with 16 other top-3 finishes, establishing Corvallis as one of the premier CC & T&F powers in Montana.

In recognition of his success with harriers and thin clads, Coach Yoakam has been a 3-time MCA Coach of the Year and an 11-time nominee.  He was also a nominee for Regional COY and was recognized by NHSACA as Assistant COY in 2016.  Understanding the importance of athletes being involved in multiple sports, Yoakam was instrumental in organizing the Girls’ Softball Association and serving as president.   He has also had stints as president of Regional Soccer,  American Legion Baseball, and Babe Ruth Baseball.

Mark’s induction ceremony will be in Lincoln, NE, on July 22nd.  The MCA is honored to recognize outstanding coach and long-time MCA member, Mark Yoakam, with this prestigious award.  Friends and family are invited to attend.

2019 Winter Coach of the Year Awards